The legend of Orval

The monastery was born of an act of gratitude: Mathilda was a widow and her weddin-gring had accidentally fallen into the fountain. She prayed to the Lord and at once a trout rose to the surface with the precious ring in its mouth. Mathilda exclaimed : 'Truly this place is a Val d'Or'! " In gratitude, she decided to establish a monastery on the site.

Orval's renowned ale is the product of an authentic Trappist monastery deeply imbued with grace and antiquity. Yet as one traveler was to learn, not even this legendary brewery has wholly withstood the march of modernity.

Without a doubt, one of the finest and most storied breweries in Belgium is in the Notre Dame d'Orval monastery in Villers-devant-Orval, near Florenville in the Belgian province of Luxembourg (not to be confused with the independent duchy of Luxembourg to the east). It is one of the world's six remaining Trappist abbey breweries, owned and occupied by true, cloistered Trappist monks. The other Trappist abbeys in Belgium are known commonly as Rochefort, Westmalle, Westvleteren, and Chimay. The sixth brewery, called Schaapskooi, lies just over the Dutch border to the north at the Koningshoeven monastery.

The Orval abbey is more than 890 years old, and its fame justifiably spreads each day as more and more people discover the beer it has been brewing for the last 87 years -- a top-fermented, bottle-conditioned specialty beer named, simply, Orval. As I discovered on a recent visit, however, the ancient monastery and its famous brewery have not entirely elluded the commercial age. Recent times have brought significant shifts in Orval's brewing operations that will likely surprise fans of Orval and of Belgian beers in general. 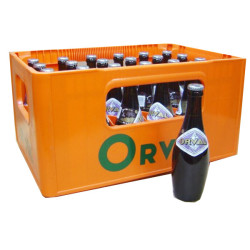 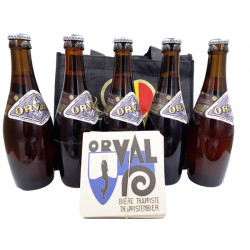 Mark mai 21, 2019
We visited the brew site, toured exterior ruins from original abbye, drank the beer at Cafe, and bought beer at the gift shop on site. 10 bottles w/glass in excellent box for 20€