Gueuze, the Champagne of Belgium

The soubriquet “The Champagnes of the Beer World” is often applied in general to the tart, refreshing styles of beer that can be made from wheat. The term Methode Champenoise is sometimes informally borrowed by brewers whose beer has a further fermentation in the bottle. Just as the wine-makers in the Champagne region have made that style of fermentation their speciality, so have Belgian brewers. Comparisons with Belgian beers, but none applied on one or both counts to many Belgian beers, but none more than the Lambic family’s sparkling Gueuze.

Gueuze is pronounced almost like cursor, though for such an artisanal product that seems an inappropriately high-tech mnemonic. The word Gueuze may derive from the same root as gas and geyser, and simply refer to the possible consequences of tapping a cask or opening a sparkling bottle, and thus releasing a great amont of carbon dioxide. (In the United States, there is a similar story about Steam Beer).

Being Lambic in origin, this is a wheat beer. It is made by the blending of two or more Lambics to create a secondary fermentations and a Champagne-like sparkle. Sometimes the words Lambic and Gueuze are hyphenated, especially if the product is being served from the cask. This may have been an early form, made with the intention of turning the rather flat Lambics into a sparkling drink. (The British add sugar priming to their cask ales for the same reason, and the Germans Krausen with wort). It was when they bottled the result that the Belgians truly discovered what an elegant drink a blend of Lambics can be, and today that is the classic manifestation of Gueuze. Because the fermentation builds up considerable pressure, Gueuze is put into the same bottle as are used for Champagne. 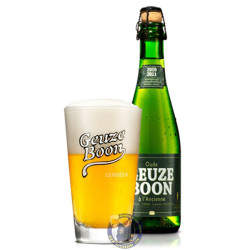 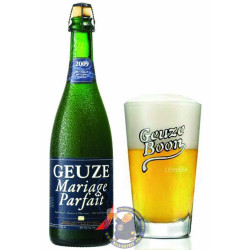