Beer, more than other alcoholic beverages, has a certain degree of seasonality. Winter is the time for hearty ales and lagers. Duvel is a soft, golden elixir made by Brewery Moortgat in Malines, Belgium. This is a beer so deceptive that one brewer who tasted an early batch around 1923 exclaimed, "This is a devil of a beer." A devil of a beer -- how appropriate for this new year on our troubled planet. We can only hope that, like Duvel, the year turns out to be a pleasant one. Duvel (pronounced DOO-vull) is a derivative of the Flemish word for "devil." It's devilish, all right. Even a gentle pour into a glass produces a huge, thick head of bright white foam. The beer itself is a pale golden color with an enticing nose. The taste is gentle, with teasing hints of spicy Saaz and peppery Styrian Goldings hops. It's well-balanced with a restrained, malty sweetness. But be careful: Duvel is devilishly strong at 8.5 percent alcohol by volume -- nearly double the strength of your basic Bud (5 percent and in another world entirely). That's the devil of it. Duvel is so delicious, so drinkable, that it's easy to drink too much. The best way to drink Duvel is to savor it slowly out of a tulip-shaped brandy glass, the kind that gathers the aroma and concentrates it. This is a top-fermented ale that one should drink ice cold. According to English beer guru Michael Jackson, Duvel was formulated in the early 1920s using extra pale malt and a yeast derived from a bottle of McEwan's Scotch Ale. The brewing and fermentation process is complex and lengthy. After two months of aging, Duvel is bottled. A bit of fresh yeast and a dollop of sugar is added before the bottles are capped or corked. This old-fashioned method allows fermentation to continue in the bottle at a slow rate, preserving the beer and protecting it from the rigors of long-distance transit. Duvel is widely available. 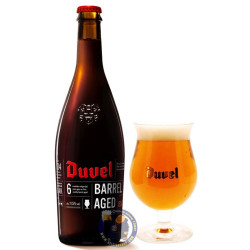 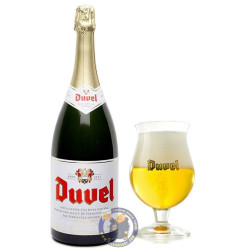 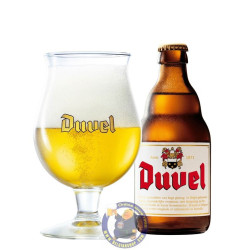