Brewing beer is a complicated activity

Brewing beer is a complicated activity, in which each stage requires a great deal of patience and constant supervision. There are three main stages:

1. Preparation of the malt

Preparation of the malt

The first stage consists of converting barley, a hard type of grain, into a crumbly malt rich in enzymes. In order to achieve this, the grain has to be left to germinate for 6 to 7 days at a humidity of 45% and at a temperature of 12°C to 15°C. After that, the germinated yeast is dried and heated using hot air. This is the process called oasting and which is sometimes done in tower shaped buildings or oast houses. After drying and heating, the malt is stripped of its last germinated roots.

The crushed malt is mixed with water and 10 to 20% of other types of non-germinated grain, such as rice or maize, are frequently added to the malt. As these types of grain contain little nitrogen, the brewer can improve the colloidal stability of his beer in this way. The flavour is also less mushy as a result. The mixture is then gradually heated to a carefully selected temperature. This operation ensures that the sugars and proteins are processed more completely, which leads to the formation of maltose and amino acids. After that, the mixture is filtered to obtain a liquid. This liquid, called wort, is then boiled for around an hour and a half. Hops are added during boiling, which gives the beer an aroma and slightly bitter flavour due to the lupulin. The wort is then cooled and filtered again.

This operation ensures that an alcoholic drink is obtained from a liquid rich in sugars: the wort (the sugars come from the starch of the barley, which are converted by the enzymes of the barley grain itself). The operation proceeds as follows: the wort is sprinkled with brewer’s yeast and the mixture is left to ferment for four to eight days. Carbon dioxide gas is formed together with the alcohol which makes the beer fizzy. The beer is then stored for a number of weeks at a temperature of around 0°C, until it is fully matured. Then it is filtered with sterile filters and drawn off. 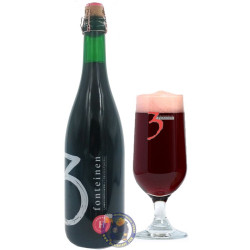 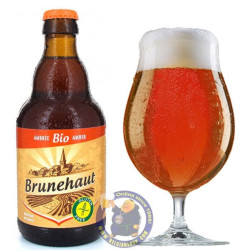